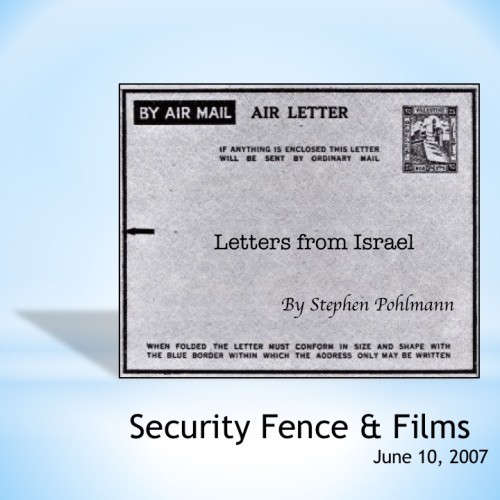 This is becoming a flood of correspondence from me. My apologies. No one wants that nowadays.

I hear so much about the problems of crossing the security fence from Israel to the Occupied Territories and vice versa, or from Arab village to Arab village. Most of us must have sympathy with the innocent victims of this sitation, but it IS their brothers and cousins who have forced the hand of Israel. I usually add that my daughters are alive because of that fence (wall in some parts where direct fire is the danger).

But while the arguments on the subject continue on both sides, I think about the other security fence that millions must cross every day. It someones takes minutes; it often takes over an hour. When I cross parts of the fence (in the USA), the government marks me as an SS – and I am subject to ‘special security’, which occasionally can be very frustrating and even embarrassing. I refer of course to the airport checks. A whole new industry borne out of terrorism. An hour added to our travel time. Perhaps $50 added to every ticket.

I normally take a book. But when I am forced to become frustrated at the delays and discomfort, whom else can I blame but the modern terrorists….

Last week, I watched ‘Cast A Giant Shadow’, a ’66 film with Kirk Douglas playing the part of a renegade US officer whose roots draw him to help Israel and its War of Independence. Of course, the film is dated. But it is also incredible when you realise that the important scenes were filmed a year before the 6-Day war. How short are our memories, and how important to be reminded, even by such films, of the facts. These include –

I could go on….but last night, I saw ‘Beaufort’, the award-winning Israeli film featuring the Crusader Castle on a hill in southern Lebanon. It covers the days prior to Israel’s pullback from the area, and the intense atmosphere among the few soldiers during those strange days.

It is a stunning film; very intense. You have to see it. Perhaps just as a reminder of how stupidly necessary war is. Or vice versa.