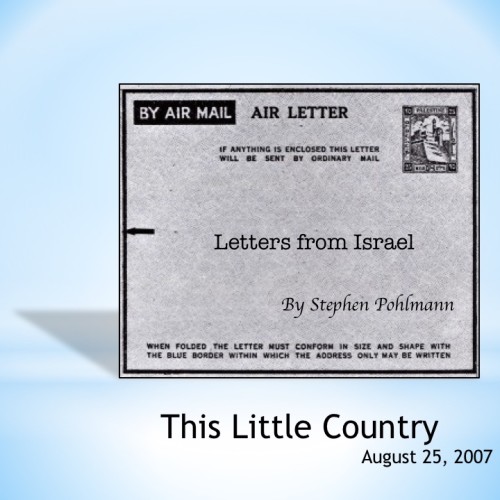 I was on my almost-daily walk – this time around the neighbourhood. (I also walk into the fields just north of here, which usually makes my white socks brown, or to and from the beach, where I have to duck to avoid the planes landing at the Sde Dov city airport).

A large van slows to a halt on the other side of the road. Deliveries? Cars must cross into the oncoming lane to overtake. The Messiah cycles up. We have many of them: warm-hearted, happy orthodox guys who want to share religious experiences. He stops next to the van, leans his bike against the roadside wheel.

Cars must swerve a little more. The driver jumps down from his cabin. He’s a van-driver; could also be a fan of a 2nd division football team; head of a family with 5 screaming kids. Who knows? Here, he is a good Jew. He presents his bare arm. The Messiah wraps the first part of the tfillim around his arm: long black plastic strips that turn the arm into that of a zebra.

Then he places what looks like a matchbox on the man’s forehead, attached to more strips that wrap around the head. The 2nd part of the tfillim. They recite a minute’s worth of prayers, standing there in the road. “Toda”, the driver says to the Messiah – thanks – and shalom. He gets back into his cabin and drives to the next delivery. The Messiah jumps back on his bike and seeks another soul to be warmed.

This weekend’s Jerusalem Post magazine features the phenomenon of the Falash Mura, the Ethiopian immigrants. ‘No other immigrant group has come from so far back to so far forward’. Of course, only a few years after their arrival from deepest Sahara to this crazy modern place, the Ethiopians will have plenty to complain about.

But it’s all relative. In many ways, they have far more that’s black than, for instance, the Israeli Arabs; the million Palestinians living in Israel as Israeli citizens. We have many reasons to be suspicious of our Arab neighbours; their cousins are trying to annihilate us. But the Ethiopians, also a deprived minority, like the Russians, the Moroccans, the Libyans, the Yemenis………, are Jews. They came here to settle, to be part of Israeli society.

They pray for and depend on the perpetuality of the State. We can never do enough for these people; and they will for ever have reason to complain, like Turks in Germany, Mexicans in USA, Romanians in Italy and Moluccans in Holland. That’s this strange world of ours.

So if the Ethiopians can adapt to Israeli society so quickly and so relatively well, why can’t the World learn Esperanto?

Here’s a picture of my cousin. Well….Aviva’s cousin. She was, when this picture was taken in 1999, Barak’s wife, Nava. (They’re now divorced – must have been that handshake, ‘cos Netanyahu’s been divorced at least twice).

Did you know that mild-looking Barak, who couldn’t decide whether Arafat should or should not go through the Camp David door before him, is Israel’s most-decorated soldier, having served as army Chief of Staff. One of his predecessors was David ‘Dadu’ Elazar. His daughter married Nava’s brother. Nava’s my cousin….

Aviva’s brother, Moshe, worked for years installing Corian, Du Pont’s wonderful material for bench-, table- and countertops. He gave us a good price for our kitchen. We had Sonia Peres in for coffee once. Shimon Peres’ wife – he’s now our President. They were our neighbours upstairs in our last apartment – now next building.

She liked the Corian; said she also needed a new kitchen. Moshe went round there, past the security, and gave her a very generous estimate – the potential publicity would have been great. She was excited – until Shimon refused – on grounds it was still too expensive…..

Rabin’s family lived in an apartment 3 buildings down from here. When he was killed, I joined the Diana-like vigil outside his house. And I also joined the crowds outside Peres’ building. He took over as P.M. and we neighbours wanted to assure him that we would be more protective of his privacy and safety than we were of Rabin’s.

(Rabin’s widow often complained that not enough was done to prevent the right-wing protesters who spent every Friday afternoon chanting in the street against his policy of giving up some of the ‘ Promised Land of Israel’).

While standing there, I noticed some of Rabin’s family, including Noa, his granddaughter whose famous freckled and blue-eyed face tearfully spoke so warmly of her grandfather at that funeral. We spoke a lot about the man, the singer who couldn’t sing, the serious man who smiled and the solder who was willing to shake the hand of the Devil in the search for peace.

I came back from one of my walks last week. I’m not a pretty sight at such times: a heavy sweat-filled old man. When I don’t decide to crawl up the 8 flights, I take one of the 2 tiny lifts/elevators. This time, Itamar Rabinowitz was forced to join me. He was our ambassador to USA and is now, among other things, President of Tel Aviv University. “I promise I won’t touch you”, I assured him. He smiled, answering “I’ve hugged worse in my life”.

On one of my upgraded El Al flights, I sat next to a government minister from one of the religious parties. This time, I was the relatively slim one, as he was enormous. Thank G-d for the upgrade. He had an angelic face – a Burl Ives type. For at least half the flight, he had other religious persons milling around him, listening to him, as one would listen to Jesus, or to Hans Christian Andersen.

When turbulence or meals would force the ‘millers’ to return to their seats, I would have this great man to myself, and we would talk – about family life, our Arab neighbours, diets and daughters. A most interesting man.

I used to work out at the local country club. Would work on all those strange machines, the ones that need adjusting according to your height and power. One day, Nadav Henefeld, one of Israel’s basketball stars was also working out. (Don’t forget: Maccabi Tel Aviv has consistently been one of the best teams in Europe).

Every b. time I came to a machine, I had to make giant alterations to the settings. I asked him if he could be bribed to let me go ahead. He’s used to making machine adjustments every time. He’s a nice guy. He let me go ahead. We chatted a lot. Nice guy.

Such a little country.

Do have a peaceful day,