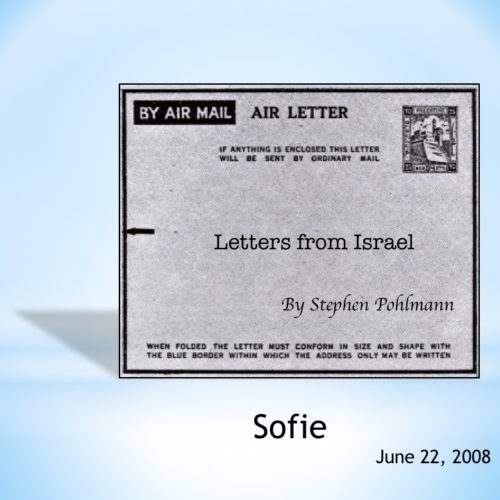 A common subject of mine is how much I am looking forward to having grandchildren – “We only have children to have grandchildren”, I like to say (not in front of the kids).

I was sitting today with my aunt Sofie. She turned 93 a few days ago. Still all there. Her late husband was my father’s older brother.

I asked her whether she felt more pleasure having kids or grandkids (or great grandkids). In her case, the circumstances in which she found herself in 1939 when Eli was born, and 1944 when Susie arrived were slightly different to 40 years ago, 20 years ago and today, even here in Israel.

Sofie was born and raised in Fürth, outside Erlangen. Attended the same school where, 10 years later, a certain Henry Kissinger could be seen.

Escaped Germany in 1938 and went with her parents to Milan, where they lived for a while in a small apartment. Later, like thousands of other Jews, they were interned in a series of camps.

She met my Uncle Oskar (Osi) in a coffee place in Milan, on the Corso Independenza, a place popular with immigrants. It was not love at first sight for her. But perhaps it was – for him. He saw this attractive lady berating some guy for being rude to some woman. The guy was, in fact, Hermann Mandel, a Jewish Senator from Fürth, and a friend from her youth. So her ‘courage’ was not as ‘true’; as it looked. But Osi was smitten.

Osi had dreams of a life in Sumatra; wrote as much in a love letter to Sofie. But her parents had other ideas for her. USA. She still has the affidavit from a company willing to employ her in Chicago.

The war changed all plans. They were interned initially in Grossetto, but as the Germans entered the north, they were moved further south, ending up in Bari. The city had already been badly bombed. They ended up in a camp outside called Carbonara. Eli was born on Christmas Day, 1939 in Milan, but Susie in the dregs of the camp, Eli constantly holding on to the only dress Sofie owned.

Having kids in those days was a burden. No milk, no hope, no nothing.

In 1945, when peace broke out, try to imagine the situation of the Jews. Most other refugees had homes and/or homelands to go back to. That was rarely an option for the Jews.

In 1991, Sophie was one of several Jews brought back to Fürth to begin the process of ‘healing’. She made 3 or 4 trips, each time being honoured and embraced by the town. The mayor, Uwe Lichtenberg, now retired, became a close friend.

He still writes to Sofie on every important Jewish holiday. Speeches, articles, presentations and memorials. And then Sofie was asked the all-important question: would she consider living again in Fürth. “My occasional visits to the town of my birth give me great pleasure. But Israel is my home”.

So, in 1945, they were among over a 1000 who were jammed into a cargo boat, the Princess Kathleen. 4 days, no seats, no sanitation, no food. A baby in arms, suckling no milk, and a 6 year-old boy, still traumatised, still holding on to that dress.

They landed in Haifa, incredibly avoiding the as yet badly organised British barriers. They were herded on to train cars. Crowded, again no seats, again no sanity. Hot. Some of them had been in such wagons before…

Doors opened, and British soldiers and some Israelis stood there, handing out chocolate and cigarettes.

One of these men stared hard at Sofie; then disappeared. Osi was jealous. After such a trip, the last thing he needed was another man eyeing his wife. The man came a second time; stared again. Then disappeared. The mood in the car was lightened at this show of apparent admiration and husbandly reaction.

When the man came the third time, Osi was prepared to attack. “Sofie?” the man enquired. “Heine? ” she responded. Chaim Wallermann, her cousin from Thüringen, now living in Haifa. Smiles all round. They would soon be OK, he assured them.  A little patience.

They were taken to Atlit, now an infamous prison. Spent 4 days interned there, while the British worked on their papers. On the other side of the wall, across the main road, Israelis shouted and protested. One of them was a little louder than most. “Frau Pollak!!” It was her sister Lottie. She had come a year before to Palestine. She had just got married; was spending her honeymoon in Atlit.

Her first view of Sofie was in that same dress, Susie in her arms, Eli holding on to that dress. They shouted at each other. “How is Osi?”, Lottie screamed. “Gut,” Sofie answered. Lottie misunderstood. She thought she heard “Tot”. And for 2-3 days, until they were released, those outside the walls waited in sad silence. Imagine the joy when he was seen to be “gut”.

When they were released, the first thing Osi saw was an Arab merchant with oranges. Oranges….Taxis from Tel Aviv were lined up, ready to take those with money to their destinations. One turned out to be another friend, ‘what’s ‘is name’ from Berlin. After hugging Sofie and ruffling the kids’ hair (perhaps wiping his hands afterwards), he smiled at the boy while buying oranges for them. The first they had ever tasted. The man also slipped some cash into Sofie’s hands. Such circumstances brings that out in people.

Sophie’s brother was in Jerusalem. (She came from a family of 6 girls and 2 boys). He was among those who helped the family extract themselves from their misery.

Osi had learned photography. But, during the first months in Israel, they could not afford a camera. Sophie worked as a cleaning woman. Osi could find no work. He looked after the kids.

Sofie’s brother in Brazil sent a camera. Now they had to find film. Not easy. A roll begged here, another sent from there. The rest is history. Osi became a medical photographer, and also took some of the best black & white portraits of my family.

Sofie has the 2 children, 8 grandchildren and 14 great-grandchildren, of whom 3 are in the military, 1 a commander.

She receives the same joy from all of her children…