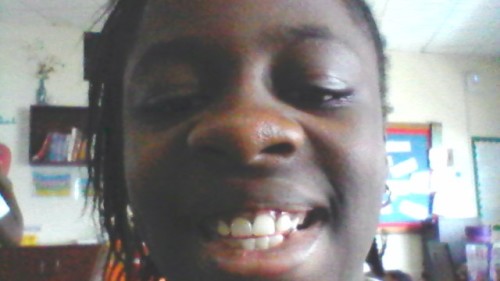 Hi, there! My name is Chelsea Oluwasijibomi Itohan Edugie Alana Oduniyi, aged 10, and I am here to tell you about me!

I was born on a Monday (somewhere around midnight) on the thirteenth of March 2006. I lived in Port Harcout, Rivers State until we relocated to Lagos State, Jakonde Osapa a few years later. As my eyes opened up, the first person I saw was my Daddy, then my mother appeared to me. I didn’t know who they were (obviously) but one thing I did know was that I would love them to no end.

As a baby, I was a sickly child, getting the measles, cholera, malera and more, but I lived through it. If I didn’t, do you think I’d be here telling you about my life today? Not likely! When I was two, I was a smart baby, singing songs with my mother and calling her name whenever: I felt an attachment to my Mommy, because wherever she went, I would be the one to follow.

I went to a school called Edu-Care, where I met some new friends on my very first day, but there very, VERY first one I met was a girl named Viano, which I liked because it rhymed with piano, my favorite instrument. The second friend I made was a girl named Zara, whose house I visit whenever! She has a dramatic bone in her body so I believe she’d make a great actor some day!

I have a big family too. On my mother’s side, I have one aunty and one uncle whose names are Aunty Abies and Uncle Osasu. My cousins are Zanetta, Zachary and Zu-Zu (from Aunty Abies) and Osama, Osarugwe, Osasuge and Osamade (from Uncle Osasu). On my father’s side, I have two uncles (one of them is my dad’s cousin Uncle Fred, who has a daughter named Ariel) and they are Uncle Tobi and Uncle Nigi, who is just a teenager. I also have an aunty on my dad’s side, but I can’t remember her name. I have three cousins on my dad’s side from my aunty but I don’t know them. I used to have a grandpa and great-grandmother on my dad’s side, but they died in a few years.

I’m afraid of all icky things and the idea of disappointing my family majorly.

Life on my own was fun and all, but I didn’t get to visit my friends as much when I was four. Suddenly, an idea popped into my head. I ran downstairs and said to my mom,

“Mommy, I want a sister.” I squealed, bouncing up and down.

Mommy just smiled at me and continued cooking her food. Eventually–nine months later to be exact–I did get a little sister. Her name was Abigail, and my, my, my–wasn’t she adorable!

Soon after that, I loved to smile at her and play with her and as a baby, of course she meant no harm….

Or so I thought….

I was thinking that life with Abigail would be a breeze, but I was DEAD WRONG. Yes, you must know how annoying it is to have a new member of the family taking away all your toys and ruining your things and all (at least SOME of you do), but with Abigail…IT WAS A TOTAL NIGHTMARE! I still love her and take care of her, but as a toddler, there was no off button on that child! The only thing that seemed to make her happy was annoying me, which obviously I couldn’t take, so I just yelled at her a lot at the top of my lungs, but I’m surprised at myself for never losing my voice.

Do you know how infuriated I was with her: calling me names, tackling me, even slapping me?! And that laugh she did at the top of her voice–like the sound of a high-pitched alarm before a building blows up–nearly made my eardrums bleed or worse, but I won’t even go THAT far.

After I’d completed Third Grade, the last thing I saw in our cumbersome deluxe house were large travelling bags in my room, with apparently a little guest in them: Abigail! She loves to hide in tight areas–I think she wants to prove that she’s not claustrophobic.

As we boarded the plane, I started getting tummy troubles–I’m very sensitive, both emotionally and physically. My mommy said it would make me feel better if I swallowed a bit to stop the weird feeling in my ears. When we got to America, immediately I ran to the bathroom: I was so pressed!

A few weeks later, my parents had enrolled me in an American school call First Baptist school of Laurel, which I remembered I had gone to in Kindergarten. It was so fun there and the fourth grade teacher, Mr. Gall, was very kind to me. The people I met were Mark, Abigail, Bianca, Julienne, Jaquel, Stanley, James, Kenny, etc.

Chapter 5: When did this little man pop in?

Not too long after, my mother had been acting very weird lately, taking lots of visits to the doctor and having a larger tummy than usual (no offense to her. :)). I was getting really worried about her, until one night she and Daddy said they were going out, to a party, and told Uncle Tobi watched over us.

After that night, Daddy had come back home, with some very good news: we had a new baby brother!!! When my older cousins heard the news, they were like,

I just loved my baby brother, but his feet were too red for my taste! His name was Ethan Olusegun Oduniyi, and I just loved his chubby little cheeks! He was very smart when he was little too. Before I would put him to bed, I would have a chat with him, and here’s the cool part: he would actually shake his head or nod! No lie!

Chapter 6: Back to CIS

One year later, we were back in Jakonde Osapa, Lagos. I had gone back to my school, CIS, and I was still in Fourth Grade. It was fun at first, but during the very end of the second term, I was starting to get myself into a lot of trouble, and it was because I read lots of books when I wasn’t supposed to! I never went to Mr. Mark’s office for it, but I think I would have if I’d continued.

In Year 5, I was more mature than I had ever been, but I think it was because I was older. In year 5, my teacher was the very tall and very pretty Ms. Animasaun, whom I had a lot of fun with and barely got into any trouble. I met a lot of my old friends, like Darius, Moradeke, Timi, Khanak, Sopriala, Chantel, Sarthak, etc. Time went by and eventually I was in Year 6, in which my teacher was the beautiful Mrs. Dosunmu, who had very good penmanship, too.

In maths, I was doing okay but I think I need to work on looking over what I’ve done. In literacy and topic, I’m not half bad, but I think there’s room for improvement. In science, i can gather facts and carry out experiments. In music, I can play the piano and guitar, but as they say, ‘Practice makes perfect’. In ICT, I can code a little and type moderately fast.

Did you know I’m a talented artist and writer? I’ve won second-place in an art competition and written my own book, which they will sell at the library. Of course, for my class and me it will be free!

Remember when I said I was more mature? Well, I was so right about that, because I’m nearly eleven, and I’m using training bras. Even though I’m older, my mom has been asking me some weird questions:

“Have you been having any weird feelings?”

“Are your armpits smelling?”

I know I said I’m older, but come on! Really? A conversation like that would very weird for a growing ten-year-old, don’t you think? Just think: That conversation could have been in front of a lot of people! Do you know how embarrassing you would feel? Awkward!

I’ve also read a lot of grown-up novels too, like 360 Degree Leader, 21 ways to become a leader, so on and so forth.

Chapter 8: My new friends and family

As I grow up, I look back to my past memories, and realize I’ve been through a lot lately, but with my new friends and family, I will always look to the future and forget the troubles. I am no longer the shy, little girl I once was, and with a lot of work, I know that any thing will be possible.