1 thought on “The Story of Me: The Art of Storytelling” 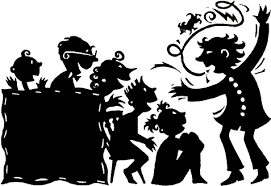 The Story of Me: The Art of Storytelling

You are surrounded by stories every day. The news on television, radio, and in the newspaper is nothing but stories. The Bible and other religious books are full of stories. The lessons teachers give in school are often stories. Songs tell stories. Pictures tell stories. Movies tell stories. Comedians make up their routines with stories. When you tell a friend about something that happened to you, you are telling a story. Can you think of the last story you heard? Think hard: it may be something you just heard a few minutes ago!

Some stories have lasted hundreds and even thousands of years and are still being told. Stories began with the oral tradition, meaning they were passed on by being heard and retold. Later, people began to write the stories down, but we still love to hear stories told out loud.

Stories are a part of every culture. Stories about our country and its history help us feel proud of our nation. Stories about our ancestors teach us about where we came from and the things we have in common with other people around us.

A man named Robert Moss said that the Australian Aborigines think that the important stories are always seeking the right person to tell them, looking for the storyteller like an animal hunting its prey. Do you think there could be a story looking for you?

Lesson 2: Getting ready to tell a story

Storytelling is more than just reading the words of a story out loud. It takes other skills as well. It is important to be able to use different tones in your voice when you are telling a story. If your voice stays at the same level, it is boring! You will want your voice to go higher and lower. You will want your voice to go louder and softer. You can practice this with games. These games will help you develop the skills you need to make yourself a good storyteller.

First, read a paragraph of a story, any story. Keep your voice the same level. Don’t go high or low or loud or soft. Just say it flat.

Now count from one to 10 (out loud!) in these different ways:

Read the same paragraph again that you read before. This time, let your voice go loud and soft. Go high and low. Go fast and slow. Do you hear the difference? Which way sounds better?

Walk across the room six times. Each time, pretend something different:

Good job! Now you are ready to find a story to tell!

Lesson 3: Finding and mapping a story

Pick a story you like to read. If you don’t like the story, it will be hard to spend a lot of time with it. Pick a story that has some things it says over and over. That makes it easier to remember. This would be a story such as Goldilocks and the Three Bears when each bear says, “Someone’s been eating my porridge.”

Lesson 4: Getting your story ready

Now you have a story and a story mountain, and you know your story very well. It is time to get your story ready for telling. First, you need a written-down copy of your story. If you can print it on the computer, leave space to the side for notes, like the story on the next two pages. If your story is in your own book, use a pencil or sticky notes to write things down.

Remember that you want to keep it interesting!

Don’t forget that your body and your voice are important tools to help tell your story:

When the story is over, make sure you end it; don’t keep going or just trail off. Make it clear with your voice or movements or expression that you are done. Make the ending kind of fast. That leaves the audience feeling that the story was exciting.

We will use the story of The Three Billy Goats Gruff to show you how to plan your storytelling.

Once you have your plan ready, practice it at least three times!

Once upon a time, back when animals could talk, there were three boy goats, called billy goats, who would walk from their house up the hill to eat the thick, green grass and get fat. Their last name was “Gruff.” To get to the hill, the three billy goats had to cross a bridge that went over a bubbling stream.

Under that wooden bridge lived a big, hairy, ugly troll. He had big eyes and long teeth and a pointed nose. And he ate billy goats like they were microwave popcorn.

One spring day, the youngest Billy Goat Gruff came to the bridge. As he walked across the bridge, his hooves made a clippity-clop sound.

“Who’s that stomping on my bridge?” yelled the troll.

“And I’m coming to gobble you up,” said the troll.

“Oh, no! Please don’t eat me! I’m so little, I’m just a snack,” said the billy goat. “Wait a bit till the second Billy Goat Gruff comes. He’s much bigger than I am.”

“Who’s that tripping over my bridge?” roared the troll.

“Oh, it’s just me, the second Billy Goat Gruff. I am just going over to eat the green grass on the hill to make myself fat,” said the billy goat.

“Oh, no! Don’t eat me. Wait until the big Billy Goat Gruff comes. He’s a lot bigger meal than me.”

“Well, okay. But hurry off my bridge,” said the troll.

“Who’s that tramping over my bridge?” roared the troll.

“It is the big Billy Goat Gruff,” said the billy goat, whose voice was even louder and meaner than the troll’s voice.

“I’m coming to eat you up,” yelled the troll.

“You just try it,” said the big Billy Goat Gruff. “I’ll poke out your eyeballs and I’ll pull of your ears, and I’ll crush you to bits like smushed-up cereal at the bottom of the box!” said the big billy goat.

That was what he said!

And then he ran at the troll, and he poked at the troll’s eyes with his horns and pulled his ears and stepped on his feet. The troll decided that maybe it was okay if the billy goats ate the grass on the hill after all.

So the Billy Goats Gruff came every day to eat the grass on the hill, and they got so fat that they could hardly fit across the bridge. And if you go to this hillside, you will still see them there, fat and happy. And if you look closely, you might see the troll under the bridge.

But don’t worry — he won’t bother you.

Now you’re ready to tell your story in front of people! Wow! You can practice on your family first to get ready for telling the story in front of strangers. Here’s how to do it: Make sure you have everything you need (props, your special storytelling hat or cape, etc.). Take a deep breath in and try to relax. Next, thank everyone for coming. Try not to sound nervous, even if you are! Make sure everyone is quiet and ready to listen before you begin. Tell them where you got your story. Did you get it from a book? Is it an old fairy tale or an old Indian legend? Tell them!

Look people in the eye while you’re telling the story. You can use the audience to help you tell the story. If there is something that repeats (like the trip, trap across the bridge of the billy goats), let your audience make the sounds with you. Invite them by saying something like, “Slap your hands on your legs with me!” You could also have the audience repeat lines with you, such as, “Not by the hair of my chinny, chin, chin!”

If the audience gets loud, pause. Wait for a second until they stop talking. Do not be mean to the audience or they won’t like your story. Don’t answer questions during the story. If someone is trying to ask a question, signal them to wait by holding up your pointer finger.

Make sure you practice and practice! You will make mistakes, and that’s okay! Just pause and then go on. Don’t say you’re sorry for the mistake because that just draws more attention to it. Making mistakes is a part of making anything, so don’t let it bother you.

Most importantly: try to have fun!