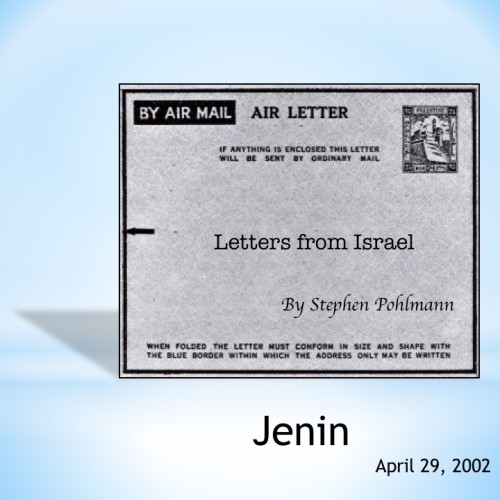 1. For years, the refugee camp has been an oxymoron. Surely you cannot have a refugee camp in the very area to which you wish to return. UNLESS, your leader is telling you that you will one day be back in Israel proper – not what the UN has agreed.

2. The camp/s have been ‘overseen’ by UNRWA since their establishment, many in 1948. It is common knowledge that Jenin has been a bedrock of terrorists/freedom fighters (call them what you will) since way back. The International Herald Tribune’s analogy of comparing it to the famous bar scene in Star Wars seems appropriate.

3. In the most recent ‘spate’ of suicide/homicide attacks, many of the perpetrators were publicised to have been from Jenin. No one has questioned the validity of the now-common video-recordings of the killers just before they leave on their mission.

4. The IDF gave residents 2 days’ notice of the impending military attack. Those who remained knew what they were doing.

5. It would have been quite ugly but very simple and militarily quite logical to have strafed the town/camp first, and then send the infantry in. This was the norm in Vietnam, Afghanistan and so many other conflicts. Why waste soldiers lives?

Jenin is now known as the bloodiest of all incursions by the IDF, but that goes for both sides. 23 Israeli soldiers dead, which is a very high number, considering their care, their professionalism and their usual military superiority. 13 were killed when first a booby-trapped building collapsed on them, and then snipers shot others coming to their rescue. 13 dead, many injured. Surely an obvious moment to halt the infantry advance and to send in the air force.

There are many in the military who regret the political decision not to do so, but to continue the door-to-door conflict, guaranteed to suffer further casualties – and it did. This was a battle.

Saddam Hussein – happy birthday! – has doubled the amount given to families of the suicide/homicide killers to $50,000, equivalent to 20 years’ income of the average Palestinian.

The Saudi’s donated a further $3 million to the fund for the suicide killers’ families.

Can you imagine the dialogue in the Harold Pinter play entitled: “The Ideal Career, Palestinian-style”?

Palestinian minister, Nabil Sha’ath, said this morning that the agreement to release the 6 criminals into the hands of British and US ‘jail wardens’ was a “face-saving act on the part of the Israelis’. Yet 2 days before, after 4 weeks of ‘living’ with these guys, Arafat decided to create a kangaroo court. They were tried, found guilty and sentenced to 1-19 years. (Believe it or not, were Israel to have tried them – their enemies – the trial would have taken months). Instead of ignoring this blatant farce, the Israeli cabinet decided to use this opportunity to help ease the tension – and surely to save themselves the heartache of an expensive and unpopular trial in Israel.

Respect the verdict – just make sure the 6 do stay in prison, unlike the hundreds who became part of Arafat’s now well-known ‘revolving-door’ policy, by which criminals are freed within months and weeks of their trials.

BBC called last night’s incursion as a ‘dark shadow’ on the current positive moves. It’s arguable whether this attack is in the right proportion or not, but surely the ‘dark shadow’ was cast by what CAN be called a massacre, the killing of 4, including a 5 year-old girl in her bed, and injuring of many by two terrorists (freedom fighters?) who dressed as Israeli soldiers, entered the settlement and calmly broke into houses, shooting indiscriminately.

I have written separately that the real enemies of the Palestinians are their leaders and their Arab brothers & cousins, who do everything they can to make sure the Palestinians stay in their camps and suffer, instead of building lives for themselves, a reason to live, a means to eliminate hate.

Here I am trying to right the imbalance of international opinion.