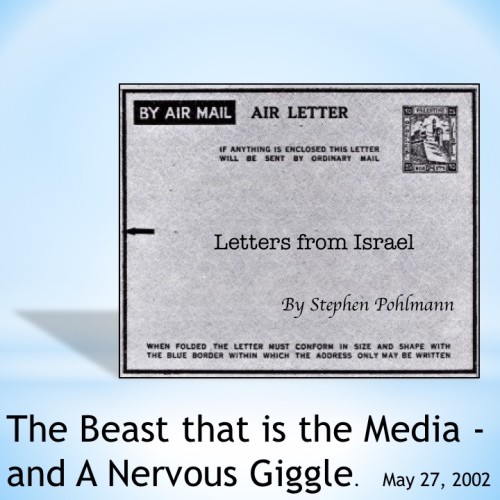 On a recent flight from Tel Aviv to Amsterdam, I had a conversation with 2 Dutch journalists, one the reporter, the other the film cameraman.

My first words were a reprimand, as one of them had mumbled, very loudly under his breath, some nasty words about the Jewishness of a – I must admit – very rude Israeli man.

The cameraman apologised, but it was too late; his bias had been revealed. He and his partner spent the next few minutes expressing how objective they had been during their stint in the ‘Occupied’ territories, trying to divide their attentions 50/50 between the 2 sides.

I asked him how many journalists he estimates to be currently in the area. At least 2000 he admitted. Each after the same story? Surely not. Each one desperately seeks an exclusive. Something different. True. And that’s objective?

When was the last time you jaywalked, missing injury or worse by a whisker? And how did you react? A sheepish grin – perhaps a giggle.

A centimetre this way or that, a second slower….

3 Days ago, at least 10,000 residents of North Tel Aviv nervously giggled. I was one of them. For years we have been complaining about the presence of the largest fuel dump in Israel, located not only 300m from the borders of Ramat Aviv Gimmel, but next to a military base. We have feared the dangers of an accident or, more obviously, a terrorist attack. Burocracy has delayed any decisions or action.

3 days ago, terrorists attached a bomb to the underside of fuel transporter and, presumably by remote control, set the bomb off when it was inside the dump. Pure luck ruled; the truck was full of diesel oil, less flammable than other fuel, and the resulting fire was contained. We giggled.

2 days later, my cousin in England, my brother in Canada and several at my office in USA had not heard about this. If it had been reported, it was only a mention.

Almost a catastrophe, almost 10,000 fatalities is just not interesting enough.

2 nights ago, a quick-thinking security guard outside Club 40, one of Tel Aviv’s most popular night clubs, noticed a car swerving away from the road and towards the club’s entrance. In no time, he had his gun out and was shooting. The potential suicide bomber was hit.

The car stopped: the bomber struggled out of the car and set off the bombs strapped to his body. Apart from slight injuries to bystanders, he was the only casualty. The bomb in a speeding car, driven into a club with over 200 revellers could have caused a catastrophe.

I wonder how may of the nightclubbers giggled.

And the media? My cousin in England, my brother in Canada and several at my office in USA had not heard about this. If it had been reported, it was only a mention.

Almost a catastrophe, almost 200 fatalities is just not interesting enough.