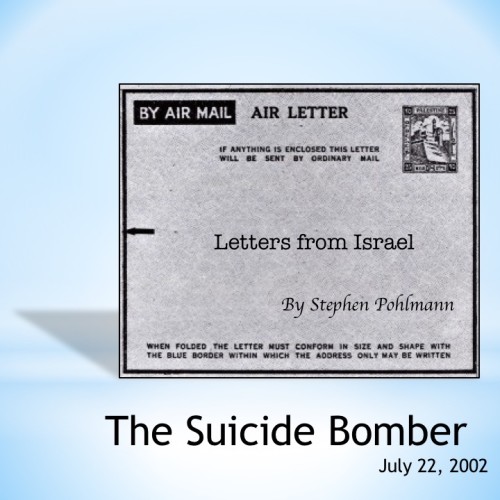 I first wonder why I am writing these ‘messages’. (I like to think they remind me of Alistair Cooke’s ‘Letter from America’. But right now, they are a defensive knee-jerk reaction to the tragedy that is unfolding in this area. Perhaps, in 40 years, if I’m still here and you’re still there, these messages WILL look like ‘Letters from Israel’).

Certainly, the main incentive is the classic one of wanting to get the full message through to people a) for whom I care, and b) who I think care. I believe you all belong in both categories.

Last week, the ‘hot subject’ was the plan to exile male members of the suicide bombers’ families to Gaza. (Also to destroy their houses, but the IDF has been doing that for some time – and the A-G – Attorney-General – did find sufficient legal precedent to allow such actions to continue). The A-G says that it is only legal if the subjects can be proved to have assisted the bombing in some way. Well, so much for the legalities.

The ‘international community’ (whatever that collective noun means) was quick to criticise the planned actions of exiling innocents. Yet while this horrible cycle of killings occurs (note my impartiality in that sentence – it is actually ridiculous to compare the suicide killings and other such attacks to the Israeli actions), and appears to be unstoppable, surely every form of prevention should be considered.

Right now, the suicide killer sees only positive – from his/her point of view. Death to the enemy, direct route to Paradise (just imagine that there are clerics who preach such horror), ’15 minutes of fame’ for him/herself, certainly at least the same fame for the family, plus financial reward and pension for the family from various sources.

Perhaps naively, I believe that if the killer-in-waiting knows that much of his family (who stop at the men?) will be exiled to Gaza (actually, what’s so bad about that? This is the land many of them officially strive for), that their lives will be disrupted, that their homes will be destroyed, there is a slight chance that he may think twice. And if that’s one guy less who does not strap the bombs around his waist and heads for Tel Aviv, that’s good enough for me. And 2 fingers up to that ‘intl community’.

2 of our guests last night lost a friend in one of the bombings. A 14-year old nephew witnessed another, seeing bits of bodies flying past him. I was downtown last week when the double-suicide-bombing occurred –saw the ambulances racing passed me to the scene. And, as I write before, we would have been among perhaps 10,000 casualties, had the blown-up fuel tanker contained regular petrol instead of diesel, standing where it was in the middle of a fuel dump located near us.

PS – Friday’s editorial in the Jerusalem Post focused on Thursday’s start to the J. Film Festival. 180 films in 10 days. The opening featured Almodovar’s ‘Talk to Her’ (which Aviva saw 2 weeks ago in a preview – it’s a ‘must see’), shown on a “giant, open-air screen at the Sultan’s Pool, the broadly-lit walls of the Old City to our right, the quaint houses of Yemin Moshe to our left. It was a gorgeous night, cloudless and cool, and some 3000 Jerusalemites came out to cheer the flamenco dancer who opened the show.”

The editorial then went into the catastrophic drop in tourism, partly blaming Israeli propaganda, which forgets that crime is way down here, that statistically Jerusalem remains a safer place than even today’s New York. The article ends: “And a wonderful place to visit, still. Anyone looking for proof would have seen it on Thursday night in Sultan’s Pool, on screen and in the faces of the audience, under the canopy of the stars”.

OK, now I’m being subjective, and that is not where I need to be in such messages. The Palestinians are also suffering terribly. But it’s mostly those in the camps; not the others (1 million in Israel, and many more in other parts of the World). Arab oil money can be directed away from support of terrorism, Intifada and Palestinian corruption (check how well Arafat’s wife and daughter are living in their homes in Geneva and Paris), and redirected towards building homes instead of squalor, jobs instead of desperation, and futures instead of hate.