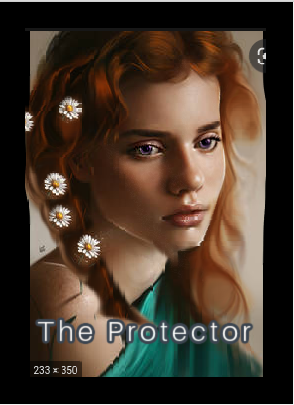 Artwork: AJ writes, Tesariel, and other friends of AJ writes 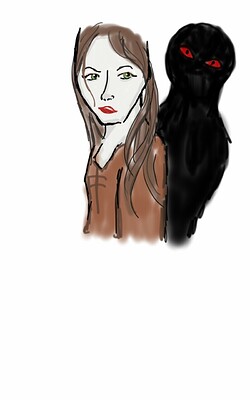 Behind him were little girls and teen girls hiding by the window, they had messy hair and small jumpers. One of the girls was the one they were looking for. “We are looking for a daughter.”

Then all the girls started to sing, it was lovely but wasting the man in the green cloak and the woman in the red dress’s time.       “She has brown hair and red freckles also violet eyes.” The small man with the brown beard scoffed and waddled to find the girl.

“Line up!” The man ordered harshly, “Yes, sir,” the girls replied groaning they lined one by one and smiled. A girl popped out of place and waved to the man and the woman.

The small man with the brown beard sighed and grabbed the girl’s arm dragging her towards the man and the woman, “Pay up,” he shouted.

The man with the green cloak shook his head, “You don’t own these children at all, you shouldn’t be selling them.” the small man with the brown beard was going to drag the girl back into the line.

The woman in the red dress rolled her eyes and put her hands on her hips very angry. “Who do you think you are selling these children! You think this is going to be easy for you? We’re going to call Residence if you don’t give us that child. This is illegal.”

The girl with violet eyes looked shyly at the new people, she didn’t know what to expect from them, they’re strangers. Hopefully they will be nicer than the last people who dropped me off! It wasn’t my fault that a fire appeared in the living room when we were watching the radio. The girl thought.

“Don’t be bossy, because I won’t listen if you are.” The girl with violet eyes put her hands on her hips and stuck out her tongue. “I’m not your toy or your daughter at all I’m just a person who happens to be in your house. Got it?”

The man in the green cloak shook his head, “We aren’t going to a house, dear.”

“Oh, of course in your kingdom. Perhaps there are also magical unicorns and dragons there too?” she raised a eyebrow sarcastically. The woman in the red dress sighed, “My name is Belliea.”

The girl with violet eyes rolled her eyes and began to kick the Kilon in the shin, Kilon didn’t flinch one bit which as the girl thought was very scary. How strong is this man? She decided not to find out.

Before the girl knew it she was thrown into a bag and unconscious. When the girl woke up she became very frightened from the new strangers staring at her. Kilon and Belliea were nowhere to be found. “This is the one?”

“Yes,” the other stranger replied, their faces were hidden as both of them were wearing black matching clothes there was a gag on the girl with violet eye’s mouth, and she was terrified.

The girl with violet eyes lost conscious again and woke up with Belliea and Kilon giving her concerned looks. The girl kicked Kilon in the face with anger. “Who were those two people? In black? What did they want from me?!” the girl with violet eye’s heart began to beat faster. Belliea soothed her by rubbing her back gently. “What people?”

The girl with violet eyes eye’d Belliea and Kilon, are they trying to trick me or something or was I dreaming? She sighed and turned away pouting like a child. How can I be so sure that you’re not tricking me?

“Can we show you our kingdom?” Belliea said softly, she was trying to be patient with this child, but the child was being very stubborn and mean. “if you’re up to it maybe you can meet the gods on the way.”

The girl with violet eyes turns towards Belliea slowly, “Gods?” she whispered like it was a sacred word. Belliea nodded slowly and gave a small hopeful smile.

“Maybe,” the girl with violet eyes said thoughtfully. I want to meet some of these “gods.”

Kilon smiled at Belliea and then folded the bag, “Hey, why did you guy’s knock me out and put me in there anyway?” demanded the girl with violet eyes. She glared at Kilon who sighed, “No one can know the way of the Elemental kingdom until they swear to be one of the citizens in the kingdom.”

“If this is a kingdom then, isn’t there rulers and royalty?” asked the girl with violet eyes, she was very confused. “and if so, then why do they need gods?”

Kilon sighed again, “You have a lot to learn, but after you swear to be a citizen then we’ll find you a name, and also you’ll train.”

Belliea gave Kilon a stern look and stomped on his foot, “To answer your question, Gods help you learn your powers better or’ll go mad and darkness will consume you.”

The girl with violet eyes looked at them with worry, “I don’t want to go to your kingdom! Take me back home!” she demanded, Kilon rolled his eyes and peered down at the girl, “Not a choice little girl, you need to protect our kingdom we’ll talk more when we are there.”

Soon they reached a gate and Belliea put her head on the metal and whispered something towards it. She closed her eyes and the metal seemed to… respond towards her. It creaked and opened.

“What was that?” the girl with violet eyes whispered, her eyes not moving from the scene.

“Elemental Earth magic, only strong ones like Belliea and Chloe can do that. They are sisters though and Chloe is wayyy more annoying.”