Which planet is responsible to complete the house construction?

Which planet is responsible to complete the house construction?

In Astrology, there are various combinations for a native to own a house. But majorly, the fourth house and its Lord deals with property-related matters. If the fourth lord is placed in its own, friendly or exaltation sign, the native is sure to have his/her own land and property. In astrology, Mars is the karaka of land and is also called bhumiputra as per our ancient texts. “Kujavat ketu” is an astrological statement that states Ketu behaves like Mars. Ketu is also seen for buildings. Mars and ketu both are karakas for buildings and play a very important role in constructing residential, office, or commercial buildings. Mars and Ketu have to be placed well in the natal chart of the native in order to own a building or house for the native. The beneficial of Planetary Transit or aspect of the planet Jupiter and Venus also help the native to possess the house of one’s choice. Saturn is a karaka of land and doesn’t necessarily show construction. So, for the purpose of finding the planet responsible for completing construction, a learned astrologer analyses the position of Mars and Ketu in the natal and navamsha chart. 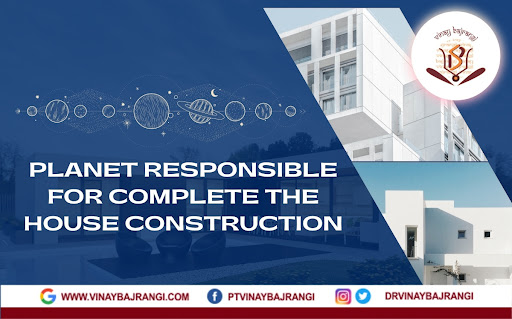 Which Planets responsible for own house

For owning a house, the native should have a strong fourth house and the Lord of the 4th house should be well placed. Not just this, but there are other factors to be considered while deciding whether a person will own a house or not. In Astrology, the second house is the house of wealth and for buying a property the person should have a strong second house as well. If the 4th Lord is placed in the first, second, tenth or eleventh house, there are bright chances for a person to own a house. Similarly, if the lagna Lord is placed in the fourth house, then the native may buy his own house and will be blessed with many properties. The strength and the placement of the fourth house and its Lord play a significant role while buying property and land. Sometimes, people also get it in inheritance for which the fourth Lord should be connected with the eighth house or its lord.

Mars: Mars signifies immovable properties. If Mars has been placed in its exaltation, own or friendly house in a birth chart, then it gives big house to the native.

Saturn is a strict disciplinarian and demonstrates strict discipline and great hard work. Saturn is a karaka for agricultural land and doesn’t necessarily show constructions. According to Astrology, Saturn shows profession related to oil, leather, iron, grains, laziness, miseries, obstacles, servants, low cast people, poor people, renunciation, deadly matters, decay etc. Saturn also shows things under the ground and that is why also includes excavations and geology. Saturn represents land and gives agricultural work with its influence on the fourth house. It also rules the miners, coal merchants, oil extractors and so on but it doesn’t show construction of houses. Land is related with it but for construction, main planets are Mars and Ketu. If Saturn has an impact on the Lagna or its lord then the native might be involved in the roadway construction or the supply of building material.

Free Career Prediction: Through astrology choose the best career path as per your birth chart

Important House in Horoscope for Property

In a horoscope, there are few houses that deal with the property. First of all, the Fourth House is the main house of property and land.

4th House- A strongly placed 4th Lord and benefic influence on the 4th house affirms Property Yoga in Kundli of a native. Even if Mars and Saturn as karaka of property and land makes relations with the 4th house and its Lord then the native acquires property despite clashes in domestic environment.

2nd House- This is the house of wealth. It depicts savings and richness of the native. It is mandatory to have wealth to buy a property, so, before deciding the acquisition of land and property by a person, the second house should be checked for the promise of house or property.

11th House- This is the house of gains and fulfillment of desires. A strong 11th house and its relation with the 4th house give many properties.

9th House– It is the house of fortune. Buying or owning a house is a matter of fortune. So, the 9th house and its Lord should not have afflictions in order to possess property for the native.
Source: https://sites.google.com/view/vinaybajrangis/blog/property-yoga-in-kundli
1