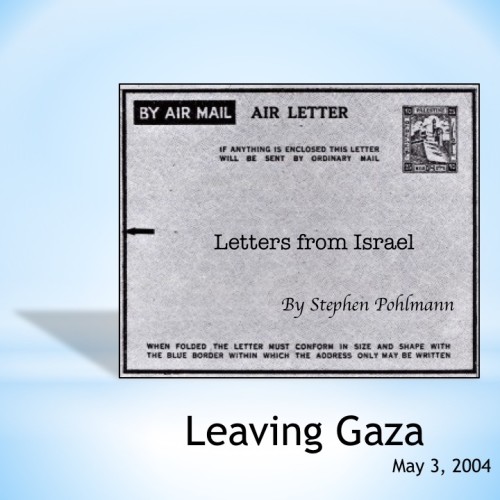 Silly me…I was going to write YET another ‘Letter from Israel’ on Saturday night – closer to Sunday morning. I wanted to illustrate how this country can explode into ecstatic excitement for positive reasons. But, in just 1 day, the picture has been clouded (to say the least) with the usual horror and political confusion.

Let’s keep the good news until the end…

Who would have thought that the leftist Ehud Barak would be one of the many agreeing with Sharon’s policy of unilateral disengagement from Gaza and most of the West Bank? And that’s because, apart from the bloody mess of Middle East politics, Arik Sharon did a Tony Blair – that is, a 180º turnaround. He was certainly one of the main architects of the settlement policy, and now he is realizing that, at least under the present circumstances, getting out – under Israeli terms – is the right thing.

What it has certainly illustrated is the enormous mess within Israeli & Middle East politics – the right-wing Jerusalem Post was among the few supporting Sharon. (Sadly, apart from the fact that Sharon only asked his Likud party members, under 200,000, only 43% were persuaded to come out and vote – such apathy. Had he asked his Government coalition members, he most likely would have won. Had he asked the nation, he WOULD have won).

Tali Hatuel, Gaza resident (settler), 8 months’ pregnant, took her 5 daughters first to get an u-sound check-up, and planned later to join the protesters in support of a rejection of Sharon’s policy. A sign stuck on her car showed the fact. “She was asking for it” says the one idiot who feels that a short skirt is an invitation to rape. Well, I for one, perhaps slightly aroused when teased in such a way, would never go beyond a naughty smile. In Tali’s case, her car was fired upon, and then sprayed with gunfire until all 6 were dead. In a decent society, disagreeing with an opinion should not be the cause of one’s horrific death.

David Hatuel has lost everything.

Yes, there were other clashes (including a CNN team that was fired upon). 2 of the attackers were killed. Later, the IDF fired upon the Hamas radio station, broadcasting joy at the killings. Some were injured. Later, 4 members of the Al-Aqsa Brigade were killed in a separate incident in Nablus. Don’t worry – the international media will give them their headlines.

And now, the good news –

Record high scores for each half and for the whole match.

The city went crazy – car’s hooting into the morning.

A chance to smile, to celebrate. Of course there was incredible security – there HAD to be, otherwise the basketball authorities would not have allowed the Final Four to be played in Tel Aviv.

And don’t forget – Hapoel Jerusalem won one of the other 2 European basketball finals – and an Israeli team came 3rd in the other.